Deep in the Costa Rican jungle, a fisherman named Chito discovered a crocodile that had been shot in the eye by a cattle farmer & left for dead. Chito was able to drag the massive reptile into his boat and brought him to his home, where he stayed by his side for months, nursing him back to health.  Watch the video:

He named the croc Pocho. “I stayed by Pocho’s side while he was ill, sleeping next to him at night. I just wanted him to feel that somebody loved him, that not all humans are bad.” said Chito, ““It meant a lot of sacrifice. I had to be there every day. I love all animals – especially ones that have suffered.”

The day finally came when Pocho was strong enough to go back into the wild. Chito took him to a lake near his house and released him, but the animal simply got back out of the water and followed him home.

“Then I found out that when I called his name he would come over to me.” says Chito. The fisherman has been hesitant to tell his story, even though 20 years have passed since he first rescued Pocho.

Pocho is roughly 5.18 meters (17 feet) long. He and Chito play, wrestle and hug on a daily basis. That bond, Chito said, took years to forge.

“After a decade I started to work with him.”, says Chito casually, “At first it was slow, slow. I played with him a bit, slowly doing more.” 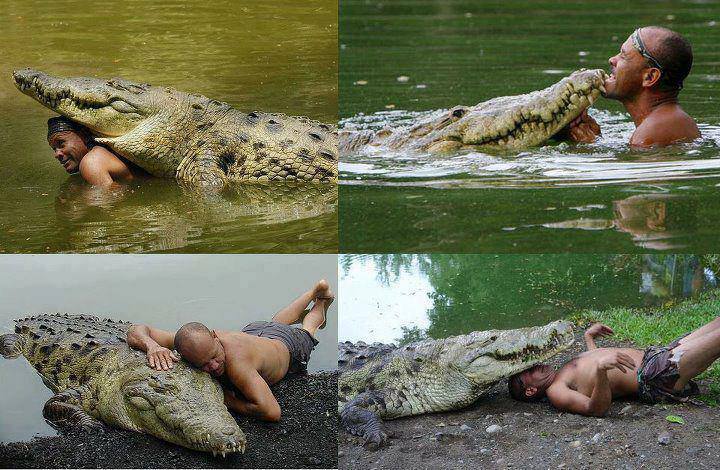 Chito has told his story now only to raise awareness of the cruelty that can be done to animals, and the difference that affection and treating other rightly can make.

“He’s my friend, I don’t want to treat him like a slave or exploit him.” said Chito, “I am happy because I rescued him and he is happy with me because he has everything he needs.”

Wild Willpower looks forward to filming Richard Lonewolf AND many other teachers & helping them teach everyone firsthand via this site for free- including Positive-Impact Harvesting Techniques so no one ruins the ecosystem or damages the populations of any biological organisms while harvesting-AND to ensure its continued growth!  We also need supplies to help compile MUCH more data throughout this site- its a lot of work!  We’re currently doing everything we can to fundraise $ 450,000 to acquire our list of needed resources so we can make this website operate as described here.  We are in immediate need of a vehicle to finish documenting his new book as well!  Even a small amount helps a great deal- we can truly help the world with this one!