The Blast Oven, or Yukon Stove, is a type of firepit that is used in tandem with a cooking technique called Rock Boiling, & together these are designed to safely boil even large amounts of water very quickly using a small amount of wood.  For processing certain “special preparation foods” such as acorns (the 20-minute method) or milkweed pods into food, Rock Boiling is the way to go.  After just a bit of practice using this method, you will see just how effective this technique is in saving you a lot of wood runs.

There are 2 ways to begin building a Blast Oven: 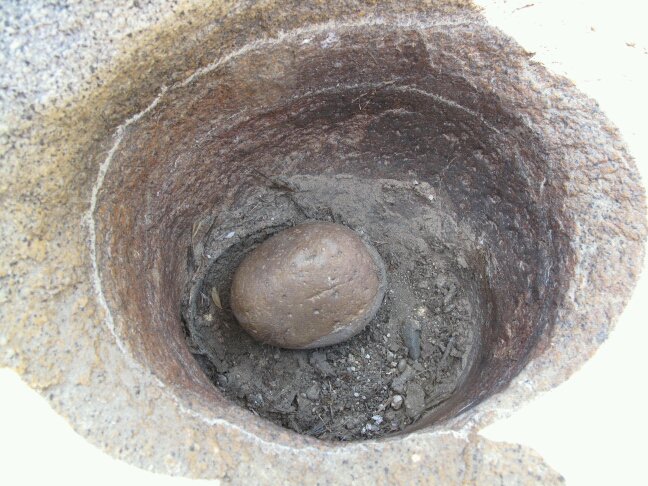 A Blast Oven can either be made from a natural divot found in the rock (usually next to a well-moving river), OR it can be made pretty much anywhere by digging a hole about a foot & a half deep into the ground, & lining the entire thing with flat rocks like an upside-down turtle shell.

The divot is then laced with deadwood from a Manzanita shrub (preferred) OR Oak tree as well as *dry* rocks. (wet rocks will explode in the fire!) In this photo, Richard Lonewolf tends a blast oven in the Kern River Canyon.

Also called a “Yukon Stove” because it is known to originate from the natives in the Yukon (Northwest Canada).

A closeup demonstrating how rocks & deadwood are interlaced & piled together inside a Blast Oven. Enjoy & remember- only YOU can prevent forest fires!!!!